Note: We are continuing to ship orders, although shipping may be delayed at times due to COVID-19 lockdown 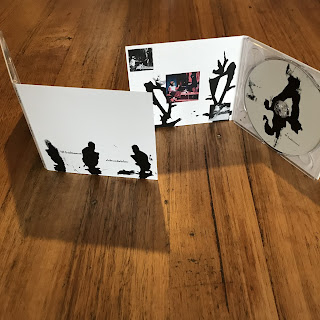 Club Sound Witches "#freakinmeout" CD/digital - #freakinmeout consists of Club Sound Witches’ (Matthew Earle & Nicola Morton) transcendent live performance at Melbourne’s Make It Up Club in July 2019, plus a longer studio track (in two parts). The beats are slightly off, you wonder if that bleep is a mistake or genius, vocals waft Circe-like out of subterranean caves backed by water dripping from stalactites. Soundtracks for uncertain times.
Comes in a 4-panel digipak with Matt Earle’s iconic inkblot-esque photocopy art, limited edition of 100 copies. Order CD by 15 April 2020 to get the special price of $12.

Will Guthrie “Nist-Nah” LP/CD - Nist-Nah finds Guthrie branching out in a new direction, this time in a suite of six percussion pieces primarily using the metallaphones, hand drums and gongs of the Gamelan ensembles of Indonesia. The music presented here is grounded in Guthrie’s travels in Indonesia and study of various forms of Gamelan music, from the stately suspended temporality of the courtly Javanese Gamelan Sekatan, to the delirious, thuggish repetition that accompanies the Javanese trance ritual Jathilan, to the shimmering acoustic glitch of contemporary Balinese composer Dewa Alit and his Gamelan Salukat.

However, far from an exercise in exoticism, Nist-Nah develops out of Guthrie’s extensive work with metal percussion in recent years (as heard, for example, on his 2015 LP for iDEAL, Sacrée Obsession), where gongs, singing bowls and cymbals are used to build up walls of hovering tones and sizzling details. Though Guthrie is broadening his palette to explore Gamelan instrumentation and pay tribute to his love of this sophisticated yet elemental percussion music, the pieces presented here are equally informed by Guthrie’s interests in free jazz, electro-acoustic music and diverse experimental music practices, exploring long tones, extended techniques, and non-metered pulse.
Nist-Nah presents a variety of approaches across its six pieces, from the crisp, precise rhythmic complexity of the opening title track to the droning textures of ‘Catlike’ and ‘Elders’. On the epic closing ‘Kebogiro Glendeng’, Guthrie offers an extended, layered rendition of a Javanese piece belonging to a repertoire primarily used for warmups, beginner’s groups and children first learning Gamelan, elegantly gesturing to his own amateur status while using the piece’s insistently repeated melody as an extended exploration of the hypnotic effects of repetition, falling in and out of time with himself to create woozy, narcotic effects until the piece eventually dissolves into a wavering fog.’

180º “Submental” CD - Debut release from new trio of Jim Denley, Amanda Stewart and Nick Ashwood. “The three are credited simply with acoustic guitar, bass flute and voice respectively, but there seems to be a hell of a lot going on besides. Bowing and scraping sounds, fluid drones, rattles and pops – is Stewart making that electronic creaking noise herself? I keep listening closer and I’m starting to believe they can actually make these sounds unaided: breath, flute and rubbed strings, struck instruments and oral clicks merge in mysterious ways that build up continually changing, complex aural textures. Stewart’s typically fragmented texts here disappear almost completely into pure sound; all three get deep into the grain of their respective axes, evoking profound expression without ever imposing it. They’re at the top of their game here.” – Ben Harper

Rune Lindblad “Death of the Moon” CD - Electronic and concrete music from 1953 to 1960 by this Swedish composer, reissuing material previously available on LP via the Pogus and Radium labels. “Rune Lindblad was born in Gothenburg, Sweden in 1923. He began composing music in 1953. This was a time when composers in Germany and France were feuding over the merits of electronic music made by pure wave oscillators versus musique concrete, which used the tape recorder as its main instrument. Rune Lindblad did not see these genres as mutually exclusive. In fact he extended his work to incorporate other mediums along with his approach to music. Deeply involved with woodcuts and painting, Lindblad was already experiment with using damaged 16mm film in his ‘Optica 1’ as early as 1959.”

Todd Anderson-Kunert “Conjectures” LP - Every recording project explores a gap that exists between uncertainty and realisation. It can be a treacherous zone of investigation, one that can frustrate as easily as it can reward. In this expanse of possibility, artists and musicians traverse a particular set of variables within which the potentials for their chosen work are realised.

When Australia artist Todd Anderson-Kunert, commenced work on Conjectures, he was intent on approaching this zone of entanglement with equal doses of curiosity and strategy. Undertaking a residency at Melbourne Electronic Sound Studio, Anderson-Kunert began trawling through the vast array of synthesisers within the facility.
After some time, he began to realise the answer to the creation of Conjectures did not lie in some survey of modern electronics, but rather an interrogation of one machine. With this strategy in grasp, he sat at their Moog System 55 Synthesizer, one of only a few existing in the world and set about creating a delicate but richly timbral album of reductive electronics.
From Todd:I feel I don’t know much, it’s not that i feel stupid, but often I feel like I’m trying to engage with the world while simultaneously trying to understand it. It’s a gap in some form of knowledge I’ve learnt to appreciate, a contemplation of details and how they relate, but where many are still unknown. When trying to translate this feeling into linear form, the word Conjecture feels appropriate, mainly due to a complimentary duality of meaning.
There is the ‘formation of conclusions based on incomplete evidence’, and so there is a form of understanding and comprehension without knowing. However there was also what was referred to as an ‘obsolete’ use, which was the interpretation of occult signs. And so here there is a similar type of guesswork happening, however the material that is being considered could be described as ephemeral, experiential, or maybe at times non-tangible. The details I’m trying to correlate aren’t always hard scientific facts. They can be thoughts, feelings, impulses or superstitions.
The album formed a rumination about engaging with this experience, and in that elements of confidence, doubt, mystery, connection and quite literally the unknown, not as abstraction but as an actual thing, an entity. Sonically it uses only electronic sounds in order to interrogate frequency, dynamics, and timbre, being influenced by genres of Noise, Modern Classical, Ambient and varieties of Electronic experimentation. Recordings that were close to me during this period include works by Eliane Radigue, Sarah Davachi, Pan Sonic, Stephen O’Malley, Okkyung Lee and The Haters.
I still feel that I don’t know much, but I wouldn’t have it any other way.
(comes with download code)

Tarab “Idée fixe” mini CD - “Idée fixe” has been arranged from a collection of recordings gathered from various locations and situations that I have found myself in over the last handful of years. Where and how is not so important in this case. This current arrangement has mutated from an installation, which germinated in various recent live performances, which sourced their material from multiple projects and situations. So this material has been added to, subtracted from, rearranged and generally mistreated many times before it has reached this current form. Some of it will continue to be pushed and pulled around some more. I won’t be able to help myself…

John Jenkins “22 Contemporary Australian Composers” (paperback book) - A rare, probably one-off, opportunity to purchase your own copy of this seminal book on the new wave of Australian contemporary composers, published by NMA in 1988.