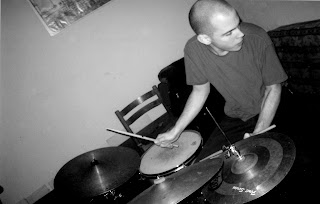 Maximum Arousal is proud to present:

After moving from western Massachusetts, USA to
Manchester, England in 2005 and then Edinburgh,
Scotland a year after that, Corsano focused on
developing an expanded solo percussion music of his
own, incorporating sax reeds, violin strings and bows,
pot lids, adhesive tape and other household devices
into his drumkit. In February 2006, he released his
first solo recording, The Young Cricketer, and toured
the UK opening for the mighty acoustic guitarist Jack
Rose.
Currently, he is the drummer on Björk's Volta world
tour

"Corsano is one of the best drummers of his
generation" - Byron Coley, Arthur Magazine

"Corsano, despite being arguably the most riotosly
energetic and creative drummer in contemporary free
jazz, does far more than merely bash his kit into
submission. Playing loud does not mean abandoning
subtlety, and Corsano's sudden shifts of texture and
dynamics are a wonder to behold." - Dan Warburton, The
Wire

"Anyone who has ever seen him live already knows it,
but this solo session [The Young Cricketer] slams the
notion home; Chris Corsano is seriously one of the
most exciting drummers on the planet." - Adam
Richards, indieworkshop.com

"the most original drummer playing in New York." - The
Village Voice